Tablighi Jamaat in World: Tablighi Jamaat's mass gatherings across Asia spark coronavirus clusters | World News
NEW DELHI: A conservative religious group's gatherings have emerged as coronavirus hotspots in Malaysia, India and now Pakistan, with authorities tracking people who attended an event with as many as 70,000 worshipers that's responsible for more than a quarter of all cases in the South Asian nation.

The Sunni Muslim missionary group, Tablighi Jamaat, hosted the event in the town of Raiwind in Lahore in mid-March. More than 2,258 people who attended have been tested positive so far, according to government data. The South Asian nation has about 8,418 confirmed cases and 176 deaths.

The five-day annual religious gathering — which began before Pakistan's lockdown was implemented — was attended by as many as 70,000 including 3,000 travelers before it was cut short, police officer Ghazanfar Shah said by phone.

The organization is one of the world's largest religious movements, with a presence in 150 nations, according to a Pew Research Center report. Estimates of its size range widely from 12 million to 80 million since the movement does not have formal membership. It's aim is to reach out to Muslims and convince them to more religiously observant in their daily activities.

Religious groups have been linked to virus hotspots around the world. An obscure church in South Korea attracted global attention after being linked to a sudden spike in coronavirus infections that accounted for about 5,200 confirmed cases in February. Singapore later banned the local activities of the South Korean sect.

Ultra-Orthodox Jewish communities became virus flashpoints in both New York and in Israel after many followers, at the behest of revered rabbis, flouted social distancing orders that clashed with their beliefs. And in India, as many as 30,000 people were placed under strict quarantine when a Sikh priest refused to self-isolate after returning from a trip to Europe. He attended events in dozens of villages and later died from Covid-19.

Governments have long struggled to deal with religious sensitivities, especially during a crisis like a pandemic, Burzine Waghmar, a member of the Centre for the Study of Pakistan at SOAS University of London, said by phone on Monday.

"There are those itching to make political capital out of it by stating that they are talking about their basic fundamental rights to worship," Waghmar said. "Religion is always a sensitive issue," he said, noting that in Pakistan, such groups were a "force to be reckoned with."

The Tablighi Jamaat gatherings were also at the center of a spike in infections in neighboring India. Devotees from around the country, as well as Indonesia and Malaysia, attended an event in the capital New Delhi, also held in mid-March, that's so far been linked to 4,300 infections. The Delhi Police on April 15 said they'd charged Maulana Muhammad Saad Khandalvi, the head of the Delhi Tablighi Jamaat, with culpable homicide over the gathering. 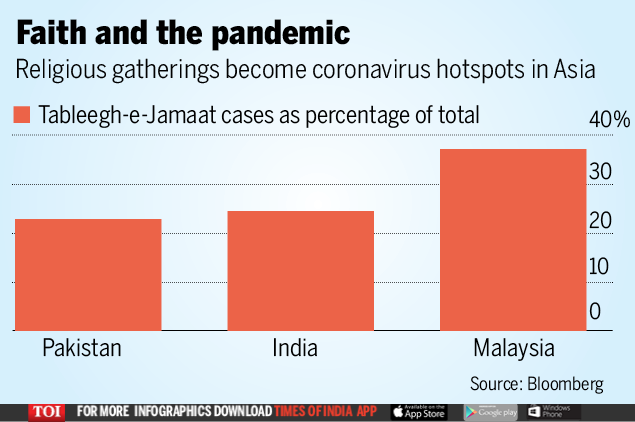 Lawyer for Saad, Fuzail Ahmad Ayyubi, said he'd received no formal notification that charges had been laid, noting there had been a wave of misinformation surrounding the gathering.

"As soon as government orders started pouring in, Maulana Saad started complying with those orders and subsequently during the quarantine period, he issued a statement and even an audio clip saying ‘please cooperate with the government authorities. Go forward and present yourself to be examined. Don't hide,'" Ayubbi said by phone on Friday.

Ayubbi said the organization had been treated unfairly — the gathering in New Delhi took place more than a week before the March 25 lockdown was announced and while India's national parliament was still sitting just kilometers away.

In Malaysia, authorities linked a cluster of coronavirus cases to a Tablighi Jamaat event that ran from Febrauary 27 to March 1 and was attended by about 16,000 people at a mosque near Kuala Lumpur. That gathering is still the source of the biggest cluster in Malaysia, with 1,946 confirmed cases out of the country's 5,425 infections. Singapore and Brunei subsequently reported cases that could be traced back to the Malaysia gathering.

Neither the Tablighi Jamaat in Malaysia or the Sri Petaling mosque answered multiple phone calls and an email seeking comment.

Pakistan's first wave of cases came from Shia pilgrims who returned from Iran, one of the worst-affected nations.

Since then, about 78% of total cases have come from those two religious groups, Pakistan's junior health minister Zafar Mirza said in a televised speech last week.

Mufti Najeeb Khan, a prominent follower of Tablighi Jamaat in Pakistan who is a Shariah adviser to Summit Bank Ltd. said the March event was "cut short after the government instructions came for a lockdown." Khan added, "If there were clear instructions, the event would not have happened."

The group has since voluntarily converted many of their own places into quarantine facilities across Pakistan's towns and villages, Khan said.

Pakistan extended its lockdown till the end of April, taking the movement restriction to about six weeks, but reopened some industries to contain the economic damage and prevent more people falling into poverty. The nation's economic growth is expected to contract for the first time in 68 years.

Still, the government decided to reopen mosques on April 18 despite most nations keeping places of worship closed. People will stand six feet apart, instead of the regular practice of standing shoulder to shoulder, President Arif Alvi said in messages on Twitter.